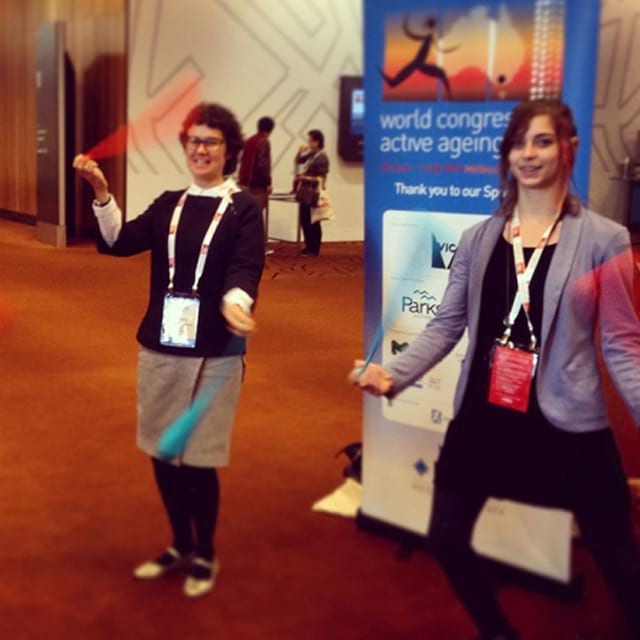 Tags
active ageing
Australia
conferences
All posts
The conferences.
The poi lessons.
The pre-tests.
The participants.
Just say No to section G.
The signature quest.
Planning the poi trial.
The Kapa Haka class.
Learning to make Māori poi, except for that last step.
And then I moved to New Zealand. To get a PhD. In poi spinning.
The Hackathon (part 2)
The Hackathon (part 1)
The business men.
Post TED talk patience, prospects, and perseverance.
The TED talk.
The dress rehearsal, less than 24 hours before the TED talk. When the Orbitar didn’t work.
Orbitar: 1, Laptop: 0.
An introvert’s worst nightmare. I mean, the TED talk speaker orientation.

With round one of the clinical trial complete, it was time to share the news about all of my amazing discoveries! After thoroughly saturating facebook and instagram, I had no choice but to expand out into the real world. No wait! There was one last stop before that…the strange, the esoteric, the not quite real world realm of…conferences. And with two conferences on ageing being held a week apart in the closest (but still not that close) land of Australia, off I went, teddy bear and contact poi in tow.

I was greeted at the Brisbane airport by a fellow flow artist who graciously offered to pick me up and bring me straight to their monthly fire jam. I sat on the lawn watching the Brisbane flow community do their thing, poi flames and smiles flickering in the still night air.

With the conference looming the next morning, I decided to head toward the hotel. Unfortunately, there were a number of things between me and the hotel, primarily my phone’s disinterest in working / helping me navigate, bus service already ending for the night (how did it get so late?!), and the lack of forethought I had given to this leg of the journey which resulted in me having no Australian cash. The ferry operator took pity on me, and after exchanging a hand drawn thank you card for my ride, and immediately walking the wrong way off the ferry for a considerable length of time, I arrived at the hotel.

“Oh…there is definitely a mistake, you see my department paid for this hotel in advance. Do I have record of this? Uhhhh let me see…”

With no email record and all of New Zealand asleep, I promptly burst into tears and prepared to sleep on a park bench. The hotel receptionist took pity on me (two pitying strangers in one night!), and it was decided I would sleep there for the evening and sort it out in the morning (which ended up in me fronting the money and my department telling me to sort it out when I got back. Not very reassuring, but, I could think of no better option).

I plopped down on the bed feeling tired, poor, and slightly distressed. At the time I took comfort in the fact that these feelings were only temporary. Little did I know, they would become quite the reoccurring theme.

Conferences are weird. I think everyone else probably knew this, but I did not. I also seemed to be the only person who a) did not know anyone else at the conference, b) was not funded to come to the conference, c) did not have funding for my research, and d) found the whole ordeal PAINFULLY awkward and demoralizing. Both of my presentations were attended by a handful of people, but when you subtract the number of people who were not listening, and the number of people who did not care, that left about…zero to one people who were actually engaged. I made a makeshift booth at both conferences, out where the vendors were, and tried to lure people in with my colorful socks…

Unfortunately getting people to try poi was even more awkward than the conference itself. I felt like some sort of salesperson or ringmaster, “Step right up folks! Try the amazing spinning sock! It wont bite!” So there I was, spinning poi in fancy dress clothes, in a convention centre, amongst people selling exercise machines and therapeutic robot baby seals, with conference attendees just starting at me. One attendee admitted he thought I had been hired as a circus entertainer.

Thankfully, there were a few moments of relief, such as –

Meeting Furio; conference attendee, mathematician, toy enthusiast, and Mayor of Udine, Italy. No, he was not afraid to try poi. And yes, he did have a brief case full of puzzle toys, one of which (a stick with a loop of string on the end) he attached to the button hole in my jacket, and after about an hour of trying plus the help of two children, I was able to solve and remove.

An impromptu visit to Photon Props after the conference, the workshop of a few Brisbane flow artists who are manufacturing high quality modular flow props. Really impressive stuff. Somehow, I ended up taking home the ends of a dragon staff.

Meeting conference attendee and the Finish chairmen of HUR, a computer-based exercise equipment company, whom took pity on me and gave me a free ticket to the (too expensive for students) conference dinner. We strolled dinner-ward discussing world travels, conference awkwardness, and things to do before we die.

These lovely ladies, who were not afraid to be themselves, have a good laugh, give poi a go, and even pose for this picture.